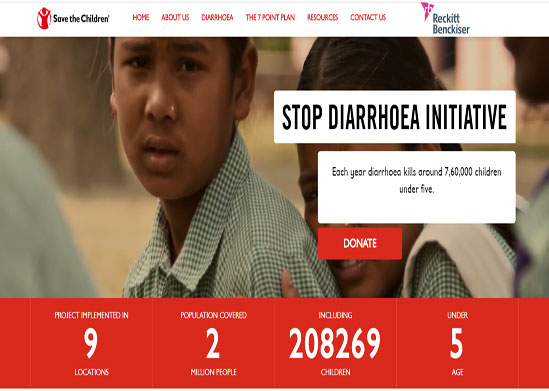 As per WHO Diarrhea is defined as the passage of three or more loose or liquid stools per day (or more frequent passage than normal for the individual). According to UNICEF recent report, diarrhea disease accounts for nearly 1.3 million deaths a year among children under five years of age, making them the second most cause of child deaths worldwide.

Stop diarrhea initiative is a signature program of Save the Children, in partnership with Reckitt Benckiser. The program was envisaged to contribute to RB and Save the Children's global ambition of removing diarrhea as a top-five leading cause of death amongst children by 2020. The program is planned according to the WHO/UNICEF's 7-point plan.

This application tests the effectiveness and efficacy of the WHO/UNICEF 7-point plan. Collate evidence to demonstrate proof of concept and value for money, and advocate for the state and national government and its partners to replicate and scale up the approach nationally.